[This review was also published on RPG.net.] 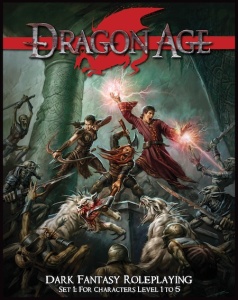 TL;DR: A slick, well-made homage to the roots of fantasy role-playing aimed at introducing new players to the genre.

Others have produced good reviews of the system, including one capsule review from Lev Lafayette and one playtest review from a GM’s perspective by Extrakun, which provide useful detail on the game mechanics. Rather than repeat what they have said, I’ll let the readers refer to these and I will simply provide my feedback on actual play from a player’s perspective, with some comparison to Green Ronin’s other popular system, True20.

I am reviewing the PDF version as well as the print set. The PDF is very pretty, fully bookmarked, easy to get around. The print box set is good quality, thin little books, easy to read and attractive. The writing is clear and the editing generally good. The art is generally good to very good, though sadly one of the pieces I least like is the cover.

I have only a basic acquaintance with the setting of the computer and console game on which the pen and paper RPG is based. For what it’s worth, it looks to me like the CRPG does a good job of bringing more character development to the genre than the average CRPG or MMORPG.

The pen and paper RPG Set 1 (which I will only refer to as the RPG in the rest of this review) presents succinct information on the setting, but for a newcomer it’s all pretty vanilla fantasy. Although it’s billed in all versions as “dark fantasy”, it feels like “regular fantasy” to me (while something like the Midnight setting for d20 would definitely qualify as dark.)

The setting info targeted at players is brief, which is good if you don’t want to scare away newcomers, but the GM has to give periodic info downloads on various setting aspects. I don’t find the setting arresting in itself, and I frequently found myself wishing we’d go visit another Green Ronin setting instead, Freeport. (They would mesh just fine.)

Character Creation: For a system that is supposed to be simple and friendly to newcomers, I don’t find it so straightforward. I think the instruction that screws it up is actually the very first one: start with a character concept. Wrong.

Characters are generated old AD&D-style by randomly rolling three dice for each stat, in order; at the end, you can switch two stats of your choice. It would be a lot easier to just roll the dice and see what you can make out of those stats than to try to match them to a design concept. Next time, that’s what I’ll do; it’s easier than gritting your teeth over stats and options that don’t match the initial concept. Other players in our group also had the same impression.

In truth, I heartily detest random-roll character creation systems; they always mean vastly mismatched starting characters. Naturally, when we started our group, the other players had totals of +17, +16, and +13 in roll modifiers. I had +9, including a point wasted on the Magic stat. That said, I like to think I used what I had well in order to stay as effective as possible, create a niche for the character, and avoid being completely redundant. Therefore, I can’t call this a crippling flaw.

Nevertheless, I recommend using one of the two options from the Set 2 Open Playtest, which either allow you to rearrange all your ability rolls as needed (Option 1) or even better, to use a point-buy system in which everyone gets +10 to distribute among abilities (Option 2).

I like that the character creation creation steps help players flesh out some background about their character — where she is from, what is she like. One of the last steps of the process is to identify some personal goals and ties, which help the GM construct stories in which the PCs will have a stake. GMs, the characters’ goals and ties are one of your most useful tools, so don’t forget about them!

Character Classes and Starting Options: Another disappointment in terms of freedom to build from the character concept is the limited choice of starting Talents, which prevents serious customization. You’ll do fine if you want to play a standard thief or ranger (use the Rogue class), magic user (Mage), or fighter (Warrior).

However, if you want to start with a beast master (as animal training is very popular in Ferelden), you can’t start with the talent Animal Training and you can’t get it until you are at Level 3, when you get a second talent. Similarly, if you want to make a dedicated healer (magical or not), horseman, minstrel, etc., you have to wait until at least level 3 before you can be as good at it as the thief is at thieving and the warrior at hitting things. That may seem very quick for people used to playing 23rd level characters, but this is the box set for levels 1-5, so you have to be halfway through the useful life of Set 1.

Basic Die Roll System: For most challenges, you roll three six-sided dice and total them, adding your applicable ability score. This feels very much like True 20 Lite with 3d6 instead of 1d20, and a few embellishments like the use of the Dragon Die instead of Conviction Points (see Stunts, below). This is a pretty good approach. I prefer the normally distributed results of 3d6 over the flat curve of 1d20; and the style of rules will be readily understandable to most players of True20, d20, D&D, and other variants.

Stunts: If you roll doubles, you can do “stunts”; the value of the Dragon die generates stunt points which can be used for special actions. For example, rolling 1 and 4 on the regular die, and 4 on the Dragon die, would count as doubles (4, 4), with the Dragon die score indicating that you produced 4 stunt points. The original list of available stunts in Set 1 is limited, but the Set 2 Open Playtest version expanded their use so I’m looking forward to the official Set 2 take on stunts (which is just coming out this week).

The bad: These stunts are after-the-fact affairs; you only know whether you can use them after you have rolled the dice. As a result, you may get the chance to execute stunt when you are uninspired or circumstances make the list of stunts inapplicable, and you can be denied the opportunity even when you have a clever idea.

Another quibble – it seems like getting triples should allow for even more awesomeness. When we had a player roll 6, 6, 6, I really wanted him to do something extra special, not the same as if he’d rolled 6, 1, 6.

The good: On the fairness side, any two characters that have the same attack modifier value always have exactly identical odds of getting a stunt. In addition, you can’t “run out” of chances to perform stunts because you’re out of points. Finally, some players, especially newcomers – and this game is aimed at them – have trouble coming up with creative ideas in the middle of the action, so the stunts help guide them toward more colourful fights.

Overall, I liked having the stunts and the creativity options they opened beyond just “I attack with my biggest weapon” over and over.

Advancement: The level system is more reminiscent of various versions of D&D than True20’s because it’s based on accumulating experience points, with the increments between levels constantly increasing. It takes 2,000 XP to get to Level 2, then another 2,500 to make it to Level 3, then 3,000 more to Level 4, etc. The typical experience awards are probably fine if you’re playing on a weekly basis, but very slow if you’re playing less frequently or via e-mail or forum. When you level up, your character gets various improvements all at once, generally fairly modest.

Personally, I prefer the method used in True20 for level increases: rather than tallying experience points, the GM just declares at dramatically appropriate times that everyone gains a new level. In games where abilities can be improved on a continuous basis with experience gained (i.e., without levels), the experience awards make sense, but in level-based games they are just one more thing to keep track of without appreciable benefit.

Most of the criticisms I have leveled at the game, particularly regarding character creation and the experience system, are the same ones I uttered when first introduced to AD&D in 1983. In other words, there is a style issue, a deliberate decision to embrace an “Old School” feel, that I never embraced in the first place.

That said, the actual core mechanics are sound, consistent, and simple enough to avoid bogging down the action. I find my sweet spot with this game includes mixing in some rules from True20, but I like the Dragon Die and the use of stunts, as well as the choice of 3d6 for the core roll mechanic.

This is a good choice for nostalgics longing for a cleaner, more consistent, and better-looking version of old-time fantasy games. It’s also a good choice for even a moderately experienced GM to introduce new players to table-top role-playing.

If you are a big fan of the computer game, I understand that the mechanics are not at all similar, but give it a chance. You’ll find it’s pretty easy to learn and use, even if it looks like you can’t replicate you high-level character from the computer version.