The book club reading for July is Neil Gaiman’s American Gods (2001), so as usual, here are some pop culture links.

First, those who only know him from his novels may not realize this, but Neil Gaiman got his fame with this essentially pop culture medium, writing comic books, most notably The Sandman and the initial story arc of The Books of Magic.  There are several cross-references between American Gods and, in particular, The Sandman and its spin-offs, all pulished under DC’s Vertigo imprint.

The Sandman is excellent and remains strong for a long time.  If you ever want to sample it but don’t want to get tangled in a long story line, I recommend trying issue #50 (June 1993), which has a lovely standalone story.  If you like it, try buying the collected books from the start; if you don’t like it, this comic is probably not for you.

Speaking of comics, Gaiman got his start in the medium thanks to his friendship with Alan Moore (writer of Watchmen, V for Vendetta, From Hell, etc. — all of which were immensely better than the movies derived later).  Moore used Odin, Loki, and various other deities surviving in a modern (if alternate) world in a couple of episodes of his wonderful superhero police procedural, Top 10 (1999-2000), co-created with artist Gene Ha.  Because of the timing and the friendship, we can be pretty sure Gaiman would have seen this while he was working on his novel.

On the topic of pop culture, Ellyn Stepanek’s M.A. thesis from 2008, “Pop-Culture Artifacts: Vice, Virtue And Values In American Gods“, is available for download as a PDF file from Cleveland State University. Here is the abstract (actually a pretty wordy, babbling, nonsensical abstract, but the thesis itself is more interesting):

In dealing with literary work such as Neil Gaiman’s, fiction that both inhabits and defies conventions of genre and medium and thus easy definition, it is clear that an examination of such work benefits from as eclectic a style as Gaiman’s own approach to story-telling. While this essay attempts no summary of the author’s entire literary corpus, an analysis of the underlying influences of the novel American Gods is necessary to map the details of its territory. A survey of the convergence of the various genres and allusions within this one text, and the ways in which Gaiman measures Old World belief systems with New World contemporary values offers an entrance into American Gods‘ narrative center.

For your musical pleasure: “The Complete American Gods Mix Tape” by Bridget McGovern on the TOR Books blog.  Seriously, this list took my reading to a new level of enjoyment.  A few of the links are dead but a Google search rapidly provides new locations.

In April 2011, it was announced that American Gods would be adapted into a series for HBO by Playtone (Tom Hanks’ production company), with Robert Richardson and Neil Gaiman writing the pilot.  Richardson was the cinematographer for Inglourious Basterds, Kill Bill and Shutter Island.  The show is slated for a late 2013 or 2014 release as a six-season television series, featuring 10-12 one hour episodes in each season.  The book will be covered by the first two seasons, and followed by new material.  In June 2011, Gaiman announced that he was working on a sequel book, so presumably this will yield the television series’ later seasons.

Racialicious’ Latoya Peterson has some thought on race and the casting challenges for the show: “HBO Eyeing Neil Gaiman’s American Gods; Will a Casting Race Fail Soon Follow?” We get to see some fairly gracious apologies from Gaiman when he makes a faux pas in race relations in an interview, and constructively engage with criticism received.  Bully for him!

James Fenwick, a British illustrator, has started a project based on the book which I would very much like to see completed.

In addition, a bunch of people have posted homage art that is worth browsing on deviantART.

Two audiobook versions have been recorded, one of the original text read by George Guidall, and one full-cast version of the 12,000-words longer, tenth anniversary edition text.

American Gods Reread: from September through November 2012, Bridget McGovern and Emily Asher-Perrin posted detailed notes of their literary road trip through the book on the Tor Books blog.  Very interesting, though full of spoilers.

Only the Gods Are Real is a very useful site with an extensive overview of the gods and some other interesting features, like this essay on the geography of the book.

Fans of the book recently created an American Gods Wiki on Wikia.

All right, we know my fondness for tabletop role-playing games, so here are some options for playing your own version of American Gods. 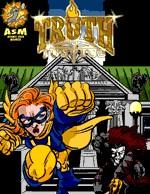 First, the one I recommend: using the supplement from Silver Branch Games Legends Walk! for the Truth & Justice system from Atomic Sock Monkey Press.  Here are some reviews I have written of Legends Walk!: TJ edition and of Truth & Justice.  The premise is precisely that the characters’ powers are derived from gods.

Third, you could try the Cosmic play level in Atlas Games’ Unknown Armies, which has a premise fairly similar to American Gods but a somewhat different (and in my opinion more interesting) take on the divine cosmology. Here is a review I wrote a few years ago.

Fourth, you can use Legends Walk! in its original version, self-contained with its own system. I don’t like it as much but the source material is the same and therefore equally interesting.

Fifth, you can use White Wolf Publishing/Onyx Path Publishing’s Scion game, which comes in three power levels spread among three sourcebooks: Hero, Demigod, and God.  I’ve played it, but I wasn’t fond of it; I like the Storyteller game engine, but this implementation was poorly balanced.

Naturally, there are a whole bunch of other systems you can use, from Risus to the Hero system.  Enjoy!