Today’s topic is “Steadfast.” I can’t think of anything that evokes steadfastness better than the totem poles carved and raised by Pacific Northwest native peoples, from Salish tribes of the Puget Sound and Georgia Strait area to the Nuu-chah-nulth and Kwakwaka’wakw wonders of Vancouver Island, to the Haida of the Queen Charlotte Islands, a.k.a. Haida Gwai, to the Tsimshian, and Tlingit guardians of the coast of British Columbia and Alaska.

The photo is of a totem pole near the Burke Museum of Natural History on the University of Washington campus in Seattle, and was taken with my trusty Holga toy camera. (Whenever I see someone pay hundreds of dollars for a Lensbaby accessory that will turn their expensive Nikon into my cheap plastic Holga, I giggle.) 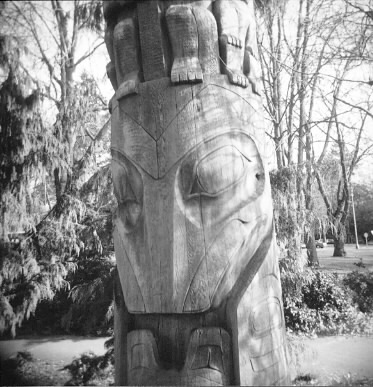