We played Motobushido (Alliterated  Games) today and it was a blast. First, the group at the table was in the right mood and everyone played their character beautifully. In descending order of precedence, we had:

Everyone was so much fun, knew their chanbara tropes, and was a cooperative story game player. That doesn’t mean we didn’t have conflicts among the party — on the contrary, we had dramatic confrontations, but because the players wanted to bring twists, not because we were at odds as players. Everyone was delightfully wicked about needling each other’s motobushi and reviving old grudges. I would have loved to play a continuing series with this pack.

The setting is somewhat inspired by Apocalypse World;

In this game, your group will play a pack of motorcycle-riding samurai – motobushi – in the days after a great war ravaged the land. You were soldiers in that war, but your side ultimately lost. The how and why of what has come before are all up to you. You will work as a group to define your own aspects of that war, including any cross-genre story elements your group desires. You will then play out the lives of these motobushi as they travel around in a world which largely rejects their ideals, and tell the stories of their trials and adventures, their wins and their losses, and their inevitable grim fates. 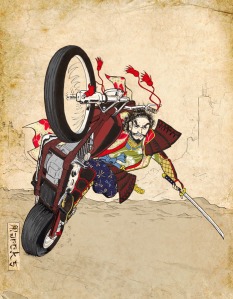 Like in AW, a lot of the characters’ and setting’s history is created by the players. You don’t use dice but two decks of playing cards, one for the Sensei and one for the players. Most actions can be merely narrated; you only use the cards when it’s time to take risks (“Gambit”) or fight (“Duels.”) At first, the system is disorienting for those of us used to dice; it looks like no other role-playing game I can think of.

Of all the RPGs I’ve played that used standard playing cards to resolve actions, this has the most enjoyable, tactical and interesting system. It blows the ones in Hillfolk/DramaSystem or Prime Time Adventures out of the water, for example. It’s not just a matter of having more cards, or higher cards; a lot of strategy can go into deciding when to escalate or concede, in order to save an advantage for later.

I’ll try to write more at some point when I have time, but I really enjoyed this game.

[Edit: Edmund posted a much more comprehensive review, from his perspective as GM.]

3 thoughts on “Motobushido: Swords and Static”