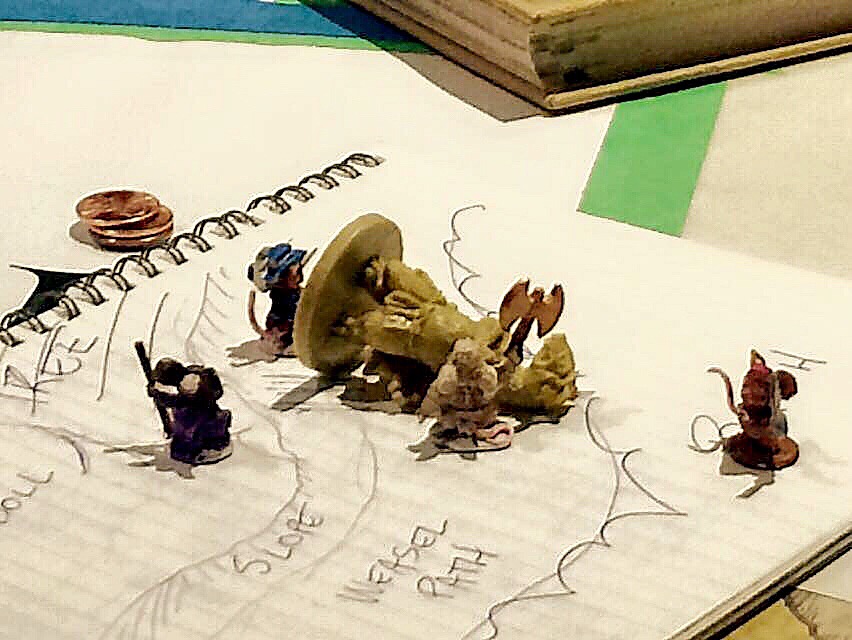 [Edit: Edmund posted his notes on the game.]

This weekend I ran not only War of Ashes: Fate of Agaptus but also a “Fate of the Mouse Guard” game using the same rules but in the Mouse Guard setting. I used mouse miniatures from ZombieSmith/Flytrap Factory (Netherworlds line), Reaper (Mouslings line), and Plaid Hat Games (plastic figures from the Mice & Mystics game).

I thought things went very well. In a four hour game we had time to make characters and have a short adventure. The heroes had been sent to maintain the border in the spring, and were trying to discover what had become of a missing alchemist from Sprucetuck, Ophelia. The mission eventually lured them into Darkheather territory, to the lost town of Ferndale… where they settled the score with one particular weasel (seen here after his defeat.)

I think the miniatures rules went over really well, people enjoyed the push-and-pull of zones, weight, and using terrain.

Ugh, Dave Chapman keeps asking questions I can’t really answer. I will hedge by showing you my favourite illustration about role-playing games (I love it and I’ve used it before), and listing a few of my favourite RPG illustrators. The image is “The Big Adventure” by zazB (Guillaume Bonnet).