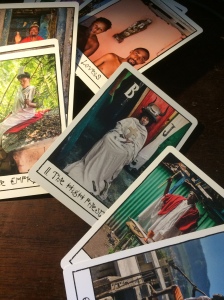 I just received this beautiful tarot deck for an IndieGoGo campaign I had contributed to a while back.  It’s the result of  a collaboration between the Haitian group Atiz Rezistans (“Artist Resistants”) and Belgian photographer Alice Smeets.  Each image is modelled after the famous Rider deck which was designed over a hundred years ago by A.E. Waite and illustrated by Pamela Colman Smith.  However, this version uses settings and materials from the ghettos of Port-au-Prince, bringing a whole new layer of symbolism.  The deck is a little large for my hands; however, smaller cards would have obscured the details.

I have several uses in mind for it: tarot readings, sure, but also prop and inspiration in role-playing games, and a reminder of the hardships — as well as the art — in places that are too easily forgotten after the initial news headlines, whether it be Haiti, Indonesia, or New Orleans.

[Edit: The deck can be purchased here.]