All right, today is a long snark-free post (really!) about the efforts made towards inclusiveness in the role-playing game subculture and by extension, in related geek subcultures. Some people may recognize their point of view and even their own words in the examples I will use. If this is you, please understand that I am not mocking you or criticizing you. I am spotlighting attitudes and underlying assumptions in our geeky hobby that too often remain unexamined.

I want to address people who are not already entrenched in an opinion but do feel jostled by new language and new attitudes promoting inclusiveness. I’ll providing some background in this first part, then in the subsequent ones I will discuss some recent examples and use them to illustrate solutions, i.e., how I suggest we, as individual gamers, approach those moments when we feel jostled.

In a society where women get paid three-quarters of what a man makes and where people of colour are at risk of being jailed or even shot just for existing, some game publishers are now releasing books showing not only women and non-white persons in a variety of roles but also characters who are explicitly gay, trans, non-binary, disabled, aged, fat, or from other previously ignored groups. They may use weird pronouns like the singular “they”, “s/he”, “xe”, or “zhe” for certain characters.  In real-space, game event organizers are posting codes of conduct, declaring bathrooms to be non-gendered, adding braille signs, and similar actions intended to signal inclusiveness.

A lot of of this can be shocking if you face it for the first time in your life. As such gestures become more frequent, game books, stores or conventions can look very different from what they were decades ago. The question can be raised: how far should we go toward inclusiveness and representation of groups that appear to be tiny minorities in an already small subculture?

Where we come from

Through its forty-some years of history. the role-playing game community has been a small subset of geekdom gathering people people who had in common a passion for creating, experiencing, and sharing worlds and adventures, stories and characters, challenges and triumphs in a very particular medium. This is a multiverse of vivid possibilities with the flimsiest of infrastructures: our vastest imagined dreamed supported by nothing but codified ways of communicating and interacting with each other.

Many — perhaps most — role-players came to the hobby feeling like odd ducks, like square pegs in round holes. In some ways this has made the community surprisingly welcoming; people who have felt marginalized can be very understanding and protective of “otherness.” In other respects, however, this has made us overly uniform in our demographics and has also endowed people who are still privileged in many ways with the impression that they know and represent otherness, that they can speak for the marginalized of all stripes.

But the people who care passionately about openness and breaking down barriers have been there since the beginning, trying to change attitudes and expectations. First, they used portrayal of characters in  images and text to provide representation, however flawed, of women and minorities. These portrayals became more frequent, respectful, varied and engaging over time.

Twenty-five years ago, White Wolf Publishing broke new ground (haha, a cemetery joke) with the first edition of Vampire: The Masquerade by using language in an additional way to insert women in the game not only as characters but as intended readers, players, and game-masters. To do this, the authors dropped masculine pronouns as the universal “neutral case” and instead started alternating between masculine and feminine pronouns in their examples of play. A quarter of a century ago this was jarring to readers, including me; but we rapidly became used to it and nowadays it’s a near-universal usage in RPGs.

The 90s and 00s saw a rising number of women and members of minorities move into RPG publishing, particularly thanks to the rise of small-press publishing and modern technologies that opened access. (See Shannon Appelcline’s excellent collection Designers & Dragons for more on the topic, particularly the Platinum Appendix.) In the real world and especially the larger geek community, attitudes also continued to evolve. The inroads of earlier vanguards of inclusiveness became well-trod paths.

Today’s “veteran” role-players may feel like they have seen the culture wars and the ensuing armistice. When they saw, a decade ago, The Blue Rose RPG from Green Ronin Publishing become the focus of another skirmish around the inclusion of same-sex relationships, polygamous marriages and realistic body types in a romantic fantasy setting, for many there was a sense that this was the last throes of the struggle. They vaguely felt that having addressed all important issues already in a post-feminist, post-racial society, a few activists were now going simply overboard.

Our hobby is still young but the phenomenon is not. A few decades ago it seemed to men that suddenly women and feminism were all they heard about, just like white people felt jostled when suddenly “everything” was about race during the Civil Rights Era, and a few years later it was “all” about gay rights. The younger you are, the more likely that these now sound like settled issues to you, particularly if you are a man, or white, or heterosexual.

People who come of age after a social issue has emerged into the limelight of public consciousness may think the conversation is over with. They also often feel that “new” issues are less important, less substantive, and affect only a few marginal cases since the issue is new to them. But by the time an issue like racism or sexism starts getting enough traction to be widely discussed, it already has a long history in less public conversations — starting with the marginalized group itself, of course, well out of sight of the the rest of society.

When a reader is startled or distracted by the language of inclusiveness, it’s a small, very personal watershed moment. Will you become accustomed to it, adapt to it, absorb it into your mental landscape so that it is no longer jarring? Or will it accumulate with other small irritants, becoming a katamari of resentment?

I believe that the first step in handling discomfort in the face of social change is to examine our reaction with all the honesty and lucidity we can muster, and separate the tangle of feelings and ideas involved. Only when we admit, at least to ourselves, the root causes of discomfort can we handle it in a reasonable way. But recognizing these causes is not enough by itself; we must then put them in perspective to prioritize them. Then we can finally come up with ways to integrate inclusiveness without being left to feel forced to anything.

If you are not familiar with the slap of being told squarely that people of your gender, race, orientation, ability, etc. are not the intended audience for a game, congratulations — you’re probably white, cis male, heterosexual, have not personally wrestled with a disability, and so forth. You’re uncomfortable with be asked to use different language, and seeing characters you think don’t belong in a given setting erodes your sense of immersion in the game.

But if you are a woman, a person of colour, blind, non-binary, live with multiple sclerosis, or a member of a similarly marginalized group, you probably know all too well that feeling when the game ambushes you by making all people of your group evil, useless, helpless or invisible. You know how hard it is to see a character that resembles you in many games, let alone a character one would be eager to play. And you know what it is to look at gamers in a store, at a convention, or online and be painfully aware that just approaching them and exchanging a greeting would mark you as an outsider to the group, no matter how much love you might share for gaming.

It’s a terrible feeling, and I don’t want my community to routinely deliver that slap anymore. I want my hobby to be joyful, open, generous, welcoming. I want the benefits of gaming — they are many, and that’s a topic for another day — to be as accessible to everyone as they are to me. I want my geeky community to be as diverse and rich as the real world I live in.

Besides, let’s face it: we could use an influx of gamers for more selfish reasons. The tabletop role-playing community has never been very large to begin with, and there are now a multitude of similar hobbies competing with RPGs, from board and card games to electronic gaming. We’re also aging. If we want our hobby to thrive we need to bring in new gamers and we need to look for them outside of the usual suspects.

In the next part of this reflection, I’ll talk about what we can do about our own knee-jerk reactions to change in the face of pushes for inclusiveness. 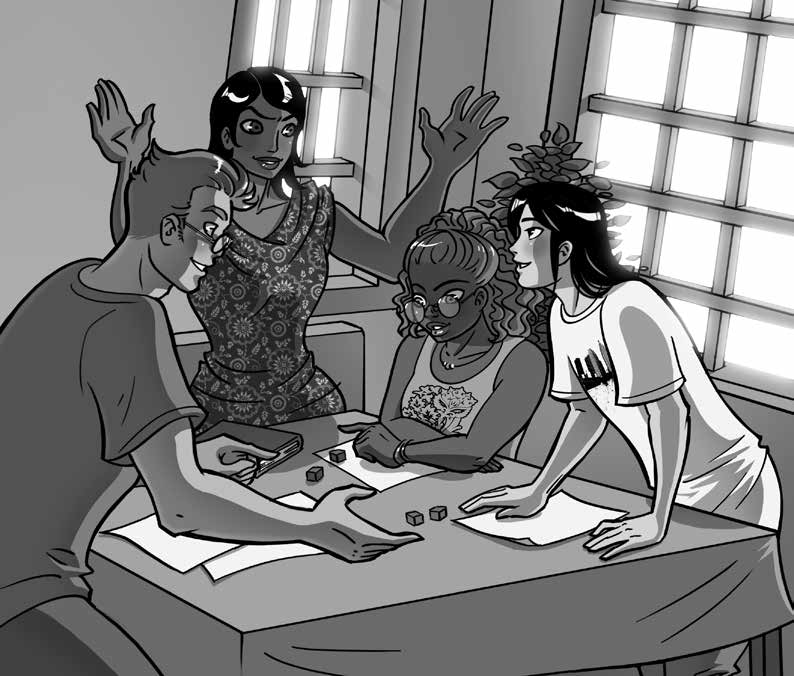 4 thoughts on “Inclusiveness in games (Part 1)”