Up-front warnings: (1) This review contains spoilers. (2) I didn’t like the movie. 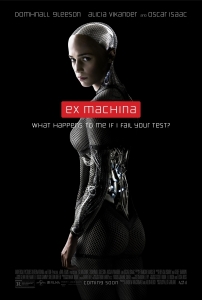 Not spoilers: The premise of this movie is that Main White Guy Character Caleb Smith (played by Domhnall Gleeson), a programmer at an internet-search giant, wins a competition to spend a week at the private mountain estate of the company’s brilliant and reclusive CEO, Antagonist White Guy Nathan Bateman (Oscar Isaac). Upon his arrival, Caleb learns that Nathan has chosen him to be the human component in a Turing Test, charging him with evaluating the capabilities, and ultimately the consciousness, of Nathan’s latest experiment in artificial intelligence — Sexy Fembot Ava (Alicia Vikander).

[Edit: A couple of friends have told me that Oscar Isaac, who is Hispanic, doesn’t read as white to them. That really surprised me, I read both the actor and the specific character of Nathan Bateman as white, but you may have a different impression. I have to add that if Bateman is supposed to read as a person of colour, it doesn’t help the movie for me, on the contrary.]

The movie tries to be a thriller but all the plot twists are predictable for science fiction aficionados. Nothing you haven’t read elsewhere. It also tries to be visually stylish and to feel intellectual; your mileage may vary. Mostly, Edmund and I spent our time asking the characters on screen: “Really? You didn’t see this coming?”

But I’d like to focus on the things that creeped me out, and not in a good thriller way. Spoilers begin here.

At one point the movie tries to hang a lampshade on this by having Main White Guy Character ask Antagonist White Guy whether he designed the A.I. as an attractive woman to distract him from the test and, I guess, give an easy A. Antagonist White Guy says no, but I designed fembot to be fuckable, go for it. Alas, when this question comes up, all Main White Guy Character cares about is how that affects him and his task, whether he’s being manipulated.

Now Antagonist White Guy is clearly written as the asshole you’re supposed to despise, so I don’t have intrinsic problems with him designing a fembot. I have problems with the movie not putting this in a larger context, with this being treated as a given and never examined in terms of misogyny.

However, it turns out that this is only one problematic aspect. I think I was even more creeped out by the racism in the subtext.

In character with Antagonist White Guy’s charming disposition, he keeps a beautiful Japanese servant, Kyoko (Sonoya Mizuno) and treats her like shit. I get that this is to portray him as the dick we’re supposed to hate, but the director also treats her like shit: I think she doesn’t get a single spoken line.

Spoiler alert: she too turns out to be a fembot, but with an artificial skin layer. Yeah, totally predictable again. But Sexy Asian Fembot never gets any agency at all. At the end, she does turn against her creator after receiving instructions from Sexy White Fembot Ava, only to be smashed to “death.”

The movie ends with Antagonist White Guy dead, and Main White Guy Character trapped; Sexy White Fembot goes to the spare android cabinet where a number of fembots appeared to be stored, peels the artificial skin off a spare Sexy Asian Fembot and dons it, then makes her escape.

Holy shit, the misogyny wasn’t enough, we also have White Woman taking everything Asian Woman has and discarding her like trash. I was nauseated. Again, there isn’t an inkling of self-awareness in the movie, which therefore fails to pass the Turing Test.