For my birthday Edmund gave me the game Leaving Earth, published by Lumenaris.

This is an attractive game of space exploration published by a local family-owned company. Design, art, layout are all the work of a single person, Joseph Fatula. The art is beautiful, the theme richly conveyed in every component, and the hand-made wooden pieces in the shapes of various spacecraft made me squee with delight. Even the box looks lovely, and it was hard to bring myself to cut the seal to open it.

The object of the game is to gather a certain number of points by accomplishing randomly drawn missions, all within 21 rounds representing the years 1956 to 1976. You can play it competitively, cooperatively, or solitaire. The basics are the same in all three modes:

You need to perform these and related actions to accomplish goals such as “Man to Space and Back,” “Working Probe Capsule on Ceres,” or “Man on the Moon and Back.” 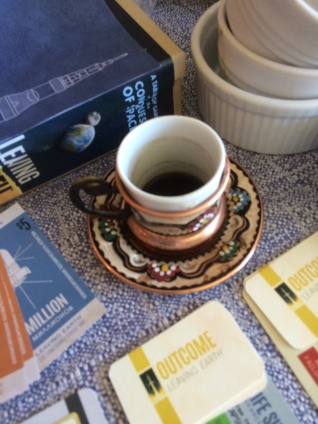 In solo and coop modes, there is only one agency and the object is to earn at least half of the mission points available before time runs out; in competitive mode, whoever gets the most points during that period wins. Missions come in three difficulty levels: easy, medium, and hard. By mixing them in different proportions, you can adjust the game’s difficulty to your liking.

For my first try, I played a solitaire game at normal difficulty setting. In preparation, I had watched the very useful video tutorial by William Hutton. This made it a lot easier to get the hang of the mechanics.

That left me with the challenges of researching advancements, and planning and executing missions effectively enough to beat the clock — er, calendar. The first few rounds are not too complicated:  build a rocket, send a probe to suborbital or orbital levels, test the equipment. But then it gets much more difficult to accomplish missions to distant locations, return missions, and especially manned missions.

Having a little familiarity with the sequence in which, historically, space exploration really unfolded was helpful. It provided a trail of breadcrumbs to follow. Even so, it’s tough to make the right decisions with a limited budget. As you get towards the later rounds, you become frantic.

In fact, I managed to complete what essentially played out like the Moonshot by the skin of my teeth. I was out of time and out of funds. I just barely brought back a manned expedition from the Moon. But three astronauts died during my tenure as director of the space agency…

I was very impressed with the game.  I think it will be fun to try the other modes and the expansions, and thanks to the randomly selected missions and exploration information, the game appears to have good replay value.

The theme is strongly supported; this is not an abstract system that could be grafted onto just any theme. It’s about the conquest of space, through and through. It made me feel smart when I figured out a good way to spend my funds, or when I suddenly grasped why certain phases of real-life missions had played out a certain way.

That said, it’s not a good choice for people who dislike using math in a game. But if you can roll with it, there are good play aids available on BoardGameGeek to help with mission planning, such as mission analyses, payload vs. thrust calculation worksheets, multi-year mission planning worksheets, etc.