We saw Black Panther and it was even better than I had hoped. It’s now a strong contender for best Marvel movie ever, and therefore, for best superhero movie ever.

My take on it: who says intersectional social justice is dour? This is the bomb! 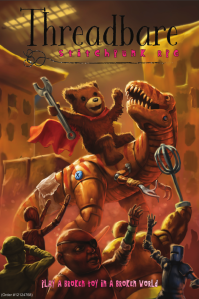 This weekend I ran a short adventure of the game Threadbare via VoIP for three of my friends, and I think we all had a good time. Designed and published by Stephanie Bryant, the game’s production was funded through a successful Kickstarter campaign in 2016, and is now available on DriveThruRPG.

Threadbare is a stitchpunk role-playing game set in a broken world populated by broken toys. Your character starts out as a Mekka (a hard-shelled, plastic or metal toy), a Sock (a single sock, often thought to have been lost in the laundry), or a Softie (a soft-filled toy).

This game is about repairing things that are broken. From the characters, their stuff, their vehicles, even the world itself—everything is damaged in some way. The players’ job is to fix it.

We only had about three hours to play so we created characters and I ran the very shortest introduction adventure offered in the book, called “Furry Road.” But since all Threadbare adventures are designed as mad-lids, the replay value is high, and this intro game dovetails easily into further adventures.

Here are the characters (images created by the respective players), and the opponents they met: 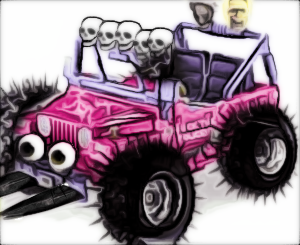 Cookie Furryosa (played by Bryanna) was a bossy but relatable bright pink muppet-type with one Minion eye and a purple sash. Somewhat grumpy yet always ready with a fun story. (Also, Bryanna gave her an awesome voice.)

Shadow’s Keep (played by Fish) was a Bunch of Little Guys, specifically a set of D&D miniatures, including three goblins (one was named Carl), two goblin wolf riders, one goblin sorcerer, a rogue, a sorceress, a gnome illusionist, a dwarven fighter, an elven bow user and a fairy dragon.

Dream Car (played by Edmund) was a former Barbie Dream Car Jeep. She had been the subject of a horrible teen goth punk home art project when her owner became an angsty teen and was now painted in a bad attempt at “Dia de Los Muertos” art with slogans like “Fuck the Police” and “Eat Your Parents.” Barbie and Ken’s plastic heads adorned her front bumper and she had plastic spikes and various “Mad Max” additions. She didn’t really understand what happened and still mostly thought of herself as a fun, cute, pink roadster that could be loved by children and have fun adventures.

The ACTION FIGURES (opposing the heroes) took themselves very seriously. In the picture, back row from left to right: Clarence, Donatello, Merle, Barnaby, and Stu. Front row: Pluto.