After a delay of over two years, I finally ran Fate of the Inquisitor for the first time yesterday at KublaCon.  It was a moral victory to finally be able to do this!

This game is my hack using:

Why? Because on the one hand I don’t enjoy the native system for Dark Heresy, it’s just not my cup of tea; and on the other, we have a bazillion WH40K miniatures which were handy to demonstrate the miniatures rules for Fate from War of Ashes: Fate of Agaptus.

I had four players, including my husband Edmund. The other three players (the very nice Gregg, Thomas, and Jon) were new faces to us and to each other. Edmund is well-versed in both the WH40K universe and in the Fate rules I was using, of course. However, the other players had minimal knowledge of either setting or mechanics. Their role-playing background was primarily from games like D&D or GURPS, and were there to learn about the Fate system.  END_OF_DOCUMENT_TOKEN_TO_BE_REPLACED 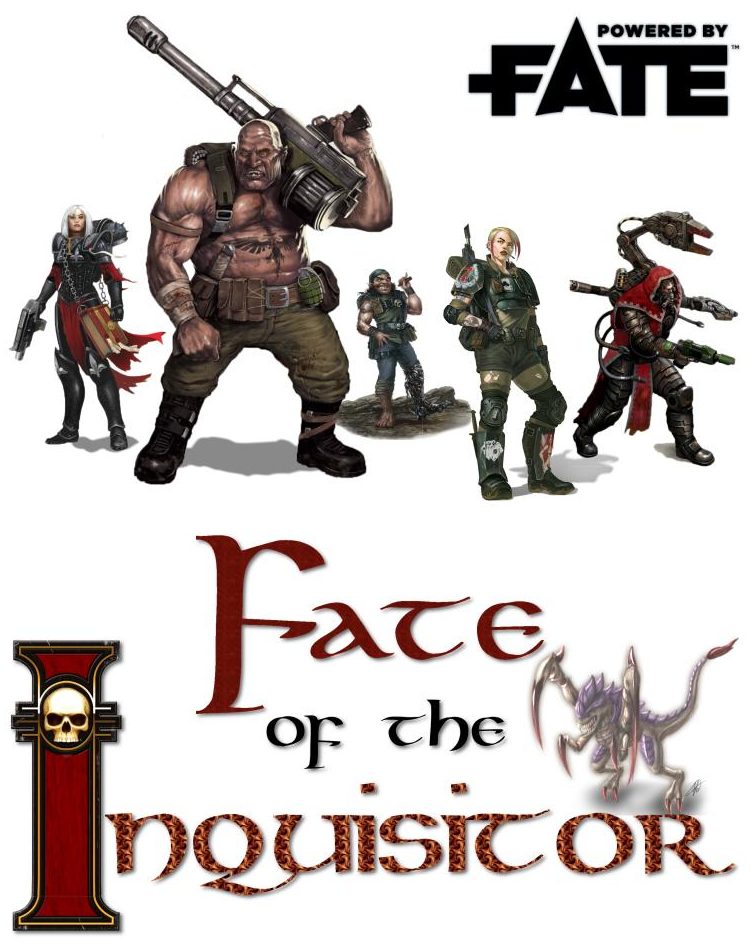 A year ago, I was planning on running demo games at conventions featuring the Open Content from War of Ashes: Fate of Agaptus. The Advanced Conflict rules, which are now also available from Randy Oest’s awesome Fate SRD website, are intended to support miniatures as an integral part of of Fate. Since we have approximately 30,000 points’ worth of miniatures in the house — you think I’m kidding, but I’m not — it seemed like the grim, gothic future of the 41st millennium, as seen in the Warhammer 40,000 miniatures combat game and the Dark Heresy role-playing game, was a perfect match.

Of course, health issues soon forced me to cancel my convention plans, but now that I am recovering and convention season is upon us, I decided to go back to packaging the game for quick-start.

Fate of the Inquisitor

Inquisitor Lucanus has led you, his retinue, to the Hive World of Corundum IV amidst an ongoing Genestealer invasion to retrieve a priceless relic from the foul xenos. Now the Inquisitor has disappeared during a brutal firefight and the ensuing cave-in, and you are chased by a Genestealer cult. Will you find your master again? Complete his mission? Call for help? Or die bravely but pointlessly?

I made templates for nine types of player characters, using a playbook format like the one used in games Powered by the Apocalypse (PbtA). The rules are pure Fate SRD, but I hope the playbooks make character creation quick and easy for time-constrained one-off games.Each comes with a choice of names, looks, customizable aspects, and stunts. The playbooks include:

I also modified the appearance of the blank character sheet from War of Ashes: Fate of Agaptus. Then I made a cheat sheet of the Advanced Conflict rules I am using, and a table sign. All of these are available on Google Drive.

I have not yet put any effort into creating well-formatted single-page folding sheets because I expect mistakes may be pointed out and it’s easiest to update text prior to layout. Also, not a big priority right now.

Your comments are welcomed!

4. What is the most impressive thing that you can remember another player’s character doing in a session?

I think it has to be in our “Savage” Dark Heresy game when our Inquisitor sent us, her acolytes, to Icenholm on Sephiris Secundus to check if it had been captured by mutant rebels. For the first time we were provided with Penal Legion troops as support, and our Arbitraor Aenid Fraal, played by Laura, was assigned control of the unit, including their bomb collars’ detonators. Alongside Aenid were Tech-Priest Sanctus Machina (Mark), Commandante Rollando Hernandez (John), and Commissar Calpurnia Jemadar (me).

Icenholm, the planetary capital, had fallen silent during the conflict and all contact had been lost with the planetary governor, Queen Lachryma III. We infiltrated the palace-fortress and reached the top floor, where we found the doors to the Throne Room barred from the outside.

When we broke in, it was pitch dark inside, but the moment we opened the door, the red beams of half a dozen lasers swivelled and locked onto the doorway. Three penal troopers were killed on the spot by hotshot lasguns on full auto. Return shots from Calpurnia and Rollando damaged some of the laser sentries. Aenid ordered one of the human bombs to run in and detonate himself, causing more sparks, explosions, and sounds of shattering. All the lasers temporarily went out. Sanctus Machina made his way into the room and located a door terminal to raise the lights.

And we discovered the Throne of Ice, now severely damaged by an explosion. On the floor were scattered Skitarii tech guards of the Adeptus Mechanicus, with three of them getting back up. On the throne was a sprawled, withered body dressed in robes of office of the queen, shot to pieces.

We had killed the planetary governor!

There was a minute pause as we considered consequences. Then our Arbitrator Aenid shrugged, and cheerfully said “Oh, well!” and we exchanged fire with the Skitarii.

It’s funny because Laura, Aenid’s player, is the nicest, gentlest person in the world. The idea that she sent human bombs to go blow themselves up for the Emperor, in the process killed a planetary governor, and just shrugged it off is so outlandish, it’s irresistibly, grandiosely hilarious for us.

Credits: Picture is the cover illustration of the Warhammer 40,000 omnibus Enforcer, cover art by Marek Okon.

EDIT: Cancelled due to illness.

KublaCon is the next big tabletop gaming convention in the San Francisco Bay Area, and it’s held only minutes from where I live. It’s not nearly as strong in the role-playing department as I’d like, so of course the thing to do is add a couple of games to the schedule!

My second game is an adventure for 2 to 5 players set in the grim darkness of the 41st millennium. If you want a Dark Heresy game that uses Fate Core rules and miniatures, this is for you! 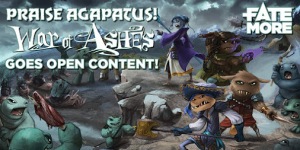 I will be using Evil Hat Productions’ Fate Core system and the miniatures rules from War of Ashes: Fate of Agaptus which I am about to adapt as open content for Evil Hat.

Here is the blurb for my adventure; I’m limited to 400 characters for the printed program:

Fate of the Inquisitor

Inquisitor Lucanus has led you, his retinue, to the Hive World of Corundum IV amidst an ongoing Genestealer invasion to retrieve a priceless relic from the foul xenos. Now the Inquisitor has disappeared during a brutal firefight and the ensuing cave-in, and you are chased by a Genestealer cult. Will you find your master again? Complete his mission? Call for help? Or die bravely but pointlessly?

This will give me a chance to put our bazillion WH40K miniatures to good use! Here are some I’m considering offering as characters: Callidus assassin, Escher ganger, Sister of Battle, tech priest, arbitor, Imperial guardsman, scout, space marine, beastman, Ogryn, ratling sniper.

If you are a role-player in the Bay Area and you’re in need of some gaming on Memorial Day weekend, check out one my games, and consider adding one of your own to the schedule so I can play in yours!