Last week at Big Bad Con, I ran Robert Bohl’s role-playing game Misspent Youth. Because I was running in a four-hour time block and it’s always a challenge for me to stay within the scheduled time, I cut through setting and character creation by using Misha Bushyager’s playset “Young, Gifted, and Black” from the recent supplement Sell Out With Me. The premise:

“What happens when a group of students from a predominantly Black, inner city public school score highly on a test that propels us to a predominantly white private, suburban boarding school? Will the other students accept us for who we are or will they make stupid ass assumptions about us?

“Will we be able to fit in with them? Do we even want to? Will we have to sacrifice our identities to become more like them or can we plant the seeds of true multiculturalism and make them more like us?”

I had two players, Kai and Joshua, and they were fantastic. The two characters selected from the clique in Misha’s playset were Mike (played by Joshua) and Sandra (played by Kai):  END_OF_DOCUMENT_TOKEN_TO_BE_REPLACED

On Friday morning I was scheduled to run a shift at Games on Demand from 9AM to 1PM. Although GoD shifts are all four-hour time blocks, GMs are encouraged to run two-hour games twice because this is useful to attendees who have just a bit of time between events. I was offering the same two-hour games as last year: Avery Alder’s The Quiet Year and Meguey Baker’s At the Stroke of Midnight. It was a treat for me to get to run both: the first group chose to venture in a graveyard at midnight to get a boon from a departed loved one, and the second to follow a community’s preparation for the expected winter hardships. Both groups of players totally “got” the spirit of the games.  END_OF_DOCUMENT_TOKEN_TO_BE_REPLACED 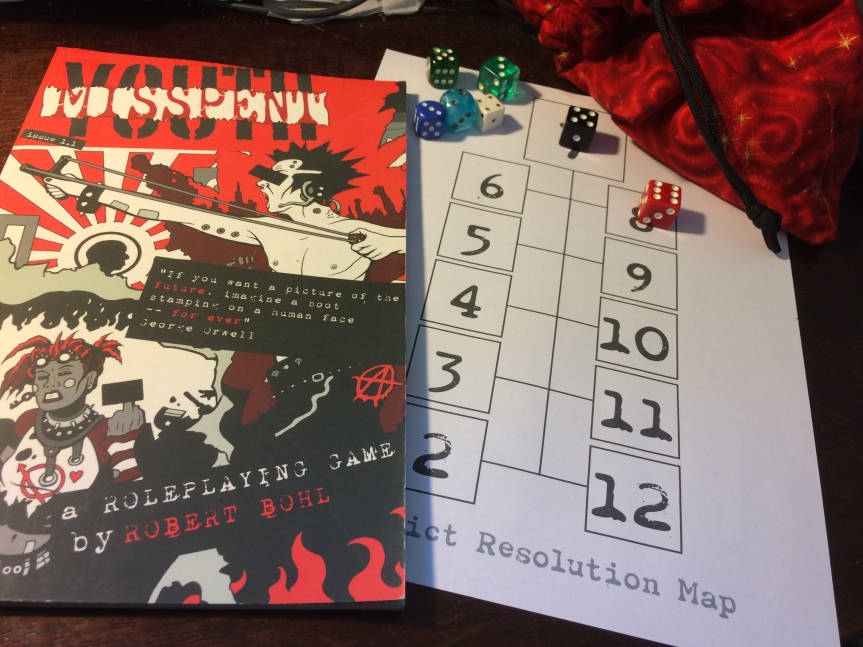 The Revolution Will Be Televised

This demo provide a very good impression of what the game is like. I recommend viewing the episodes in the following order:

Sell Out With Me

Second exciting happening: A revised edition and a supplement full of new playsets, ideas, and art are being released soon, and the Kickstarter funding campaign is under way.

Contributing authors include some fantastic people:

The Kickstarter campaign is already funded and runs for eight more days. Grab your music box, your balaclava, and your spray paint cans, the revolution needs harbingers.

Note: This review was also published on RPG.net and Emerald City Gamefest.

Misspent Youth is a game firmly anchored in the subgenre of story games. The players (the Young Offenders, or YO) and gamemaster (the Authority) work together to answer a series of questions about the setting and characters to create the setting, then play out episodes in which the Young Offenders fight off an oppressive, corrupt, or abusive Authority and generally stick it to The Man. What will they sacrifice for their ideals?

Disclaimer: I received free print and PDF copies of the book so I could playtest and review it.