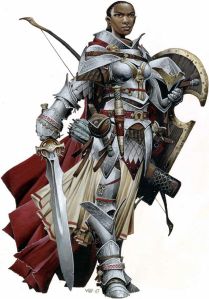 On Labour Day weekend I ended going to Pacificon. It was a last-minute decision at Edmund’s request; I had intended to stay home, do lots of  writing, keep the cats company, and straighten up the house a bit. On Thursday I agreed to go to the convention instead although I did set aside some time for writing.

To be honest, I’m not finding Pacificon as interesting as some other conventions; it’s great if you’re into historical board games and miniatures, but skinny on the fantasy and science fiction gaming sides, Euro board games, and especially role-playing other than Pathfinder and D&D. Nevertheless, I signed up for a number of games, some of which were cancelled at the last moment, alas. In the end, I played nothing but d20 variants, even though I don’t find the base system enjoyable at all: Mutants & Masterminds 2nd edition, one game advertised as Spycraft 2.0 that seemed heavily home-brewed (we didn’t even have the right character sheets!) and three Pathfinder games, one where we played dragons and two where we played goblins. Except for the M&M game, which was a lot of fun (thank you to game-master Cyrus Harris and players Chris Angelini, Jon Robertson and Edmund Metheny!), the games were lacklustre; Edmund has told the story here and here already so I won’t repeat it.

But amidst this, I found a reason to be hopeful.

In the last few weeks we have had two new shining examples in geekdom of the rampant sexism that can be found in some quarters: the nastiness which Zoe Quinn and Anita Sarkeesian have been subjected to. We’ve also witnessed some uncomfortable conversations on racism in the wake of the disgraceful events in Ferguson, Missouri, which have splashed everywhere including geekdom. Some days, it’s easy to think that the geek world is filled with assholes. At the convention, I was reminded that while there are assholes everywhere, things can get better, inch by inch.

First, I noticed that there was a bit more diversity than I remember seeing a decade ago: a variety of age groups were represented, families showed up together, there were a few more non-white participants, openly gay couples were not rare, and everybody I saw behaved courteously towards disabled gamers that had more visible challenges (e.g. with speech or fine motor control.) Historically that has been the norm at the conventions I’ve attended in the last quarter of a century, but visible diversity is increasing, which is good.

On the feminism front, I was pleased that all GMs, whatever their failings, offered a range of female and male characters among their pre-generated character sheets. Our M&M GM had male and female miniatures available for each character; the female characters in the Spycraft game were generally good action characters; and the dragons and goblins were not obviously gendered in terms of roles. In addition, the Pathfinder GMs that used canon material from the official story line used numerous prominent female non-player characters in positions of authority. Paizo Publishing has put in a good deal of effort to make its setting gender-balanced. While there is still progress to be made, I want to salute the effort and recognize its results.

Old stories of the role-playing game world: I remember how, a few years ago, Evil Hat Productions took some flak for insufficient attention to female and non-white characters. I mostly watched from the sidelines because I could at the same time recognize the validity of some of the criticism and see the effort that EHP had already made in being more inclusive; by the time I encountered the discussion, it had already turned flamey enough that I didn’t think I could add much value. I know it was hard and even hurtful for some of the EHP writers, but they did something great and amazing: they shut up after the initial defensiveness, mulled over the topic for a good long while, and learned from the experience. They’ve been trying hard to do better, and this act of recognizing imperfection and doing something about it has increased my respect for them.

Heck, a few years ago, the kind of treatment Quinn and Sarkeesian and many others have received from jackasses would not have received much notice; even most men and women of good will would have shrugged and said this was just the way things are. The fact that so many of my fellow nerds are furious about it tells me we have turned a corner. We’re not post-feminist or post-racial or anything like that, and may never be; but just like with marriage equality, we can see the day where the jackasses will be a festering minority and will be shunned when they use threats, violence, slurs, and general dickery.

This weekend Edmund and I are going to be on staff (and hopefully doing some gaming) at Pacificon Game Expo in Santa Clara, CA.  We’re on a very limited budget and we’re also trying to eater healthy meals, so we just can’t live on potato chips and hamburgers from Friday through Monday.  So we have planned to make and bring the following menu items:

It sounds complicated but it’s much simpler than it seems because we use the bread machine and the food processor a lot.  Edmund has just put the muffins in the oven, and the bread is already done.  The beef is currently seasoning and will be roasted tonight, the fruit and vegetables have been acquired, Edmund will make the oatmeal bars after the muffins are baked; and while the beef is roasting tonight, I will be making the hummus, tabbouleh, cold-brewed coffee, and some mustard since we’re out (all of those benefit from sitting in the refrigerator overnight). The soba can be prepared at the last minute.

Sadness: we decided we didn’t have time to make pita, so I bought some at the store.  But we didn’t get a single unhealthy item, and except for the pita, everything is home-made, down to the condiments.

That is also a much cheaper way to eat; do you have any idea how much freakin’ hummus and tabbouleh you can make from chickpeas and bulghur?  It’s about three to five times more expensive and far less flavourful to buy prepared foods.  The slow-roasted beef is made from eye round, an inexpensive cut from Costco which comes out cheaper per pound (or kg) than any cold cuts, deli meats, sausages or hot dogs.  Etc., etc…

Time-wise, I admit that a bread machine, food processor and dishwasher make all this food prep much more pleasant, but I have also done this with nothing more advanced than a $20 electric egg-beater in the past, and it was still worth it.

[This is the second in my series of game convention retrospectives, in an attempt to draw general conclusions about improving attendees’ and organizers’ convention experience.]

Pacificon Game Expo, held every Labour Day weekend from Friday through Monday, is another well-established convention of 31 years; it’s best known for its wargame and miniatures game section but with significant board gaming and role-playing.  It is run for-profit by a group that bought it about a decade ago from the previous organizers, and the current direction is to encourage more role-playing.

Edmund and I have volunteered as staff for other events run by the same organization before, and we were asked to run games this year to showcase the Mistborn Adventure Game, the new game published by the biggest sponsor of the convention, Crafty Games.

END_OF_DOCUMENT_TOKEN_TO_BE_REPLACED 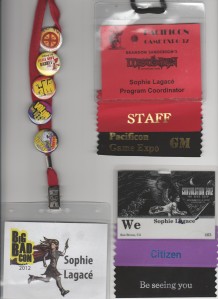 [This was going to be a very long post, so I’m splitting it into linked segments.]

Things were a little wild for us this year, convention-wise.  It was entirely unexpected too, because we’re so broke that we have no money at all to attend convention, so how did we attend four???  Answer: we have fantastic friends, we worked our butts off for all those conventions, and three of them were close enough that we could drive home at night and save hotel costs.  I’d like to review state-of-the-art game “conventioneering” and share some thoughts.  In addition, I’ll add some considerations of conventions we’re choosing not to attend, and why.

That means there will be criticism; if it’s your convention, your work, your friends, or your ideas I’m criticising, please know that it’s in an effort to draw general “con”clusions (haha), not to pick on you.  You probably have very good reasons you did things a certain way, reacting to crises as they arose; I’m talking about a general approach here.

Just wrapped up Pacificon with a relatively trying game of Cat.  I had checked the box to indicate that it was OK for kids (I’ve had many a fine young player), but not to mean “Yeah, I’ll babysit your young ‘uns.”  This was run as part of the general RPG section, not the Young Players room, and there were already a couple of adult players (and me) at the table, when two mothers dropped off their boys at 1pm without feeding them lunch first and then took off.

I naively thought the kids had been fed already, but no…  In addition, the boys were way too young for a four-hour game on the last afternoon of the convention (I’m guessing one was 5 or 6, and the other 7 or 8), so after a couple of hours of relatively good, if inattentive behaviour, they started loudly protesting that they were hungry.

I called a mom on her cell phone to tell her that the boy was antsy and hungry; the moms had gone offsite to have lunch, then picked up something to go for the boys so it was, I kid you not (and no pun intended), 3:45pm by the time they brought lunch.  By then the boys had completely lost any interest they might have had in following any semblance of rules.  The two grown-up players, my husband Edmund and the very nice Collin, were stalwart.  There was also a lovely young lady of about 10 who had played in both games we ran in the Young Players’ section this weekend, who was smart and funny and an all-around great player.

The boys were not bad boys and I wasn’t mad at them, but I did want to strangle their mothers for inexcusable obliviousness.  Next time I’ll write in the game blurb that players under 10 must be accompanied by their parents to play the game.