I’ve been neglecting my blog for all sorts of reasons I don’t want to get into right now, but it’s a new year and time for a fresh start. It’s time to once again look at the games I played in the year that just ended, and see if I accomplished some of my goals.

I played a total of 36, up from last year’s low of 29; this included 14 tactical and strategic games (board, card, and miniatures games), and 22 narrative game (role-playing games, story games, live-action role-playing). Some 23 of these (64%) were new to me, i.e., I had never played them before, including 7 playtests (19% of the total). But there were several repeat games thanks to a few recurring campaigns, particularly 13th Age, Agon 2e (playtest), Dragon Age, Journey Away, and Paladin, as well as perennial favourite Spirit Island.

With five years of data, here is what the breakdown looks like:

For the last four years I’ve also been keeping track of who I play with. It looks like this:

I have been trying to play with more new and diverse people, and that seems to be working, although there is room for improvement.

END_OF_DOCUMENT_TOKEN_TO_BE_REPLACED

On Sunday night I was scheduled to run an episode of Blue Rose, but for a variety of reasons this was not a good time emotionally-speaking. However, the whole group was available and eager to play so instead I ran a light-hearted adventure of The Warren (Bully Pulpit Games) by Marshall Miller. This game a sort of Bunnnies & Burrows powered by the Apocalypse, very easy to run with minimum preparation,

I used the “City Park” playset created by Kristin Firth and Eric Mersmann. It’s based on Central Park in New York but we decided to set it in Austin, Texas instead. This matter because of the weather, wildlife, plants, etc. Because it had been a crappy week, we agreed to make it more My Little Bunny than Watership Down.

Nutmeg the Thumper (female), a Strong rabbit; a young, energetic, go-getter, with a short-haired white coat and a black streak. She had an ongoing dispute with Oakley the squirrel, who kept getting to the best acorns first. Played by April.

Pip the Swift Runner (male), a Swift rabbit, young and overconfident; the best runner in the warren, he would do anything on a dare. Played by Adi.

Fluffy the Hutchwise (male), Shrewd rabbit despite being less than a year old: given to a child as an Easter gift, but left in the park to “run free with his rabbit friends” when the realities of caring for a house rabbit sank in. Known for his long soft coat, and floppy ears, a bit unkempt at this point. His rival for expertise on humans was an escaped laboratory rabbit called 76, with a very different perspective.

Peanut the Pigeon-Speaker (female), a Steady and experienced rabbit, currently pregnant. Her short coat’s shades of gray and ring marking around the neck made her look uncannily like a pigeon, so she had forged a bond with them.

END_OF_DOCUMENT_TOKEN_TO_BE_REPLACED 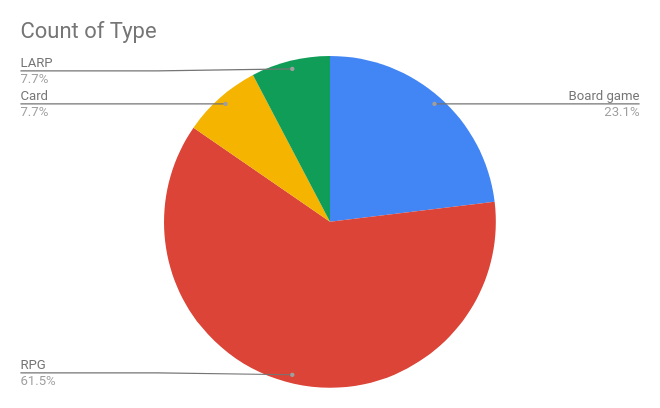 [Updated to add the names of some women and enby game designers I had somehow failed to copy-paste from my spreadsheet.]

Once again, I review the list of games I played during the year we just said goodbye and good riddance to.

I had a chance during the holidays to play with one of my online groups. You know how hard it can be to get a group together, especially when they are spread in different time zones; when the friend who was supposed to run the adventure had to ask for another week to prepare, I offered to run something in our original time slot so we would not lose our precious gaming time.

Since this group has greatly enjoyed Golden Sky Stories, I first thought I would try running Chuubo’s Marvelous Wish-Granting Engine, but I just can’t quite grasp how play proceeds, let alone explain it to others. So I decided to playtest Turn: A Game of Shapeshifters in Small Towns instead.

Turn (Daedalum Analog Productions) is “a slice-of-life supernatural roleplaying game set in the modern era”; I think of it as Northern Exposure meets Teen Wolf, or Twin Peaks done by Studio Ghibli.  It’s written by Brie Beau Sheldon and recently had a successful Kickstarter campaign (where you can find the beta playtest version, freely available.) Here is what the author says:

Players in Turn are shapeshifters in small, rural towns who must balance their human lives and habits with their beast needs and instincts in quiet drama. Their baser natures will challenge them as they strive towards goals from everyday tasks to life-changing experiences, and they will need to find comfort in one another to make it through without becoming stressed out.

Turn is part of the family of games Powered by the Apocalypse (PbtA), which means that a lot of the setting and story creation comes from the players, not just the game-master. Starting a game involves group creation of the small town where the stories will unfold, and player characters are designed by picking one human role and one beast archetype and selecting from their menu of options to customize your characters.

END_OF_DOCUMENT_TOKEN_TO_BE_REPLACED

Continuing with play reports from Big Bad Con: Friday morning in Games on Demand, I ran Meguey Baker’s At the Stroke of Midnight (Night Sky Games). The premise:

The sun sinks in the sky, bringing long shadows and a wisp of cool air. In a handful of hours it will be midnight. The veil between the world of the living and the world of the dead is growing thinner with each passing moment. At midnight it will open, and those who are able to stand unshaken before the Beloved Dead will be allowed a boon. You and your friends set out for the graveyard, each eager to meet the Beloved Dead and ask a favor from those who have gone before.

It felt perfect to play in October.

Meguey released it three years ago; the full version which I was using is on her Patreon site, but she also released a basic free version on her Medium blog, so you can take a look.

I had scheduled it as a two-hour game, but it’s hard to gauge how long a given episode will take: you can play with 2 to 6 players and the Yahtzee-like mechanics make it difficult to guess when the end is near. As play aids, I had created a cheat sheets for the Signs; and I used my dry-erase Noteboard so we could draw the elements we created. END_OF_DOCUMENT_TOKEN_TO_BE_REPLACED 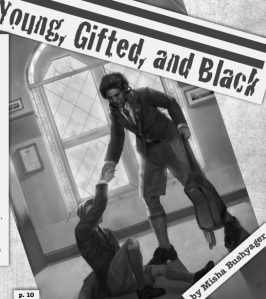 Last week at Big Bad Con, I ran Robert Bohl’s role-playing game Misspent Youth. Because I was running in a four-hour time block and it’s always a challenge for me to stay within the scheduled time, I cut through setting and character creation by using Misha Bushyager’s playset “Young, Gifted, and Black” from the recent supplement Sell Out With Me. The premise:

“What happens when a group of students from a predominantly Black, inner city public school score highly on a test that propels us to a predominantly white private, suburban boarding school? Will the other students accept us for who we are or will they make stupid ass assumptions about us?

“Will we be able to fit in with them? Do we even want to? Will we have to sacrifice our identities to become more like them or can we plant the seeds of true multiculturalism and make them more like us?” I had two players, Kai and Joshua, and they were fantastic. The two characters selected from the clique in Misha’s playset were Mike (played by Joshua) and Sandra (played by Kai):  END_OF_DOCUMENT_TOKEN_TO_BE_REPLACED

Initially I had not signed up for anything on Sunday morning because I feared con exhaustion might set in by then. But I woke up in plenty of time to make the 9AM games so I grabbed a free coffee at the registration table and signed up for Brian Vo’s “It Makes A Village,” which sounded like Dungeon World meets The Quiet Year. Spoiler alert: it was. Our characters were: END_OF_DOCUMENT_TOKEN_TO_BE_REPLACED

For my Saturday I had scheduled an array of playtests, all games currently being designed by people I love. I started with (Abyssal), a game Forged in the Dark by my friends and colleagues Ash Cheshire and Edward Turner. The premise:

Whenever humans build cities, they create shadows… hidden, dark places beneath the surface, where creatures that aren’t human gather. Some might call them monsters, and they wouldn’t be entirely wrong. But you? You don’t belong to the surface or the shadows. You are in-between… cursed, or infected, or bitten but not yet turned. You stand at the edge of the abyss. Will you hold on to your humanity at all costs, or will you embrace the change that is happening to you?

It was cool to be the first outside group ever to playtest this. There were three settings to explore: Paris, 1793; London, 1888; or Las Vegas, 1971, and the players were asked to pick. END_OF_DOCUMENT_TOKEN_TO_BE_REPLACED

On Friday morning I was scheduled to run a shift at Games on Demand from 9AM to 1PM. Although GoD shifts are all four-hour time blocks, GMs are encouraged to run two-hour games twice because this is useful to attendees who have just a bit of time between events. I was offering the same two-hour games as last year: Avery Alder’s The Quiet Year and Meguey Baker’s At the Stroke of Midnight. It was a treat for me to get to run both: the first group chose to venture in a graveyard at midnight to get a boon from a departed loved one, and the second to follow a community’s preparation for the expected winter hardships. Both groups of players totally “got” the spirit of the games.  END_OF_DOCUMENT_TOKEN_TO_BE_REPLACED

Last weekend was the eighth edition of Big Bad Con. I have had the privilege of attending every single instance and even to be part of the staff for the last few ones. It’s my very favourite weekend of the year, my Christmas.

In the last 25 years I have worked for many other conventions (organized events, volunteered, or been on staff) and attended many more, but Big Bad Con is different. It launched in 2011 with a mission to build community among tabletop and live-action role-players. Within a few years, this expanded to mean more: to make the community welcoming to all and particularly to marginalized, vulnerable, under-represented groups. Here are a few of the practical steps taken: