Hey, it’s that time once again! Thanks to an initiative launched by David Chapman, for the fourth year in a row August is #RPGaDay in the Google+ circles I follow and on Facebook. How it works: every day throughout August you get a writing prompt related to roleplaying games.

It’s a good way to share what we love about our hobby rather than kvetching about geek world annoyances, and an encouragement to write more often for bloggers and authors who can use the practice.

For me, the secret to completing this challenge is to write several entries in advance. On previous years I drafted them directly on Google+ (2014) or in WordPress (2015 and 2016). But this year I had an idea: since I was just talking about how useful Scrivener is, resulting in a number of questions on the software’s features and how to use it, I thought I would write my drafts in Scrivener. This will allow me to plan and compare entries more easily.

More importantly, though, this will allow me to share this mini project. I set up a Scrivener project with 31 sections showing each day’s prompt, and I added the graphic version of the prompts and a list of useful links in the Research folder.

A zipped version is located on Google Drive, feel free to use it. You can see I jotted down quick ideas onto the index cards; I could have removed them from the version I’m sharing, but I thought they would serve as examples of how I use Scrivener in planning my writing. I hope this will encourage people to participate in #RPGaDay2017 and/or try Scrivener.

I expect this little project will result in 6,000 to 12,000 words for me throughout August. 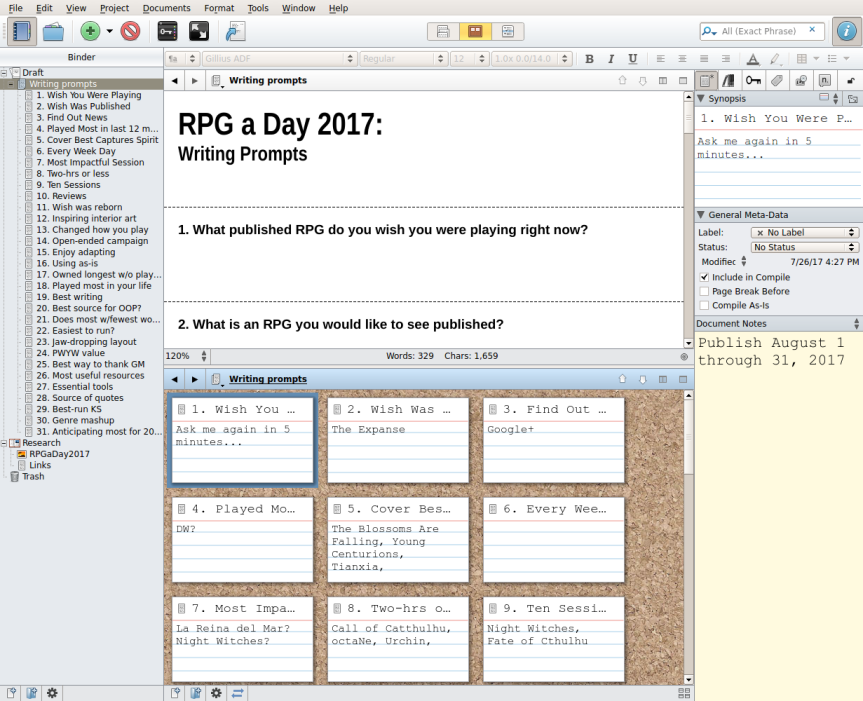 OMSFSM, Scrivener! I love it so much!

I wrote War of Ashes: Fate of Agaptus on LibreOffice and it worked well enough, but by the time the manuscript got to about the 50% mark, it started being a real chore to revise and restructure. By the time I finished, it was 221 pages that we were passing back and forth between writer and editor to handle in LibreOffice and MS Word, and it was rather unwieldy.

Towards the end of the process I downloaded Scrivener but I was too far along to try converting the document. However, when I worked on the Open Content materials from War of Ashes later on, I tested a variety of more advanced writing tools (mostly distraction-free editors and LaTeX-based power tools), with the most promising being LyX and Scrivener.

In the end I decided that Scrivener was a good option for me. It was powerful, flexible, inexpensive, multi-platform, easy to learn thanks to its great tutorials and manuals, and supported by a vibrant community.

When I say inexpensive… The macOS, Windows, and iOS versions go for $40, just enough to cover minor support costs, and you can download a free trial version. The Linux version (that’s the one I use) is free because it’s unofficial but the user community is very helpful, and I ended up sending my $40 as a donation because it was worth every penny.

It has so many features and so much flexibility to work the way you want. I use it right from the planning stage to create my structure and outline, and to gather my writing resources: publisher’s guidelines, references, examples, cheat sheets, lists of names, notes I jotted down, etc.

I use its metadata features to add notes to each section such as keywords, actions needed (“Write examples of play,”) references cited (“Top Secret, TSR, 1980,”) status (“first draft”), or who will be a collaborating author on this section.

I have Scrivener set up to save the draft in my working folder and create a backup on Dropbox, in addition to using iDrive for my regular computer backup. On top of that, every time I stop working for the night or reach a significant milestone, I compile an export version of my draft in .docx format and post it for my publishers on Google Drive so they can follow my progress, and have a work product in hand if anything happened to me.

But I kind of got used to its ease, and I forgot what an improvement it was! Except that when I stopped to take stock of my progress tonight, I looked at the page count and realized what a chore the current drafts would be to handle on a basic word processor. In addition, I had reworked several individual sections of the Tianxia Rules Companion this weekend and instead of being a major hassle to locate the sections to edit in the middle of a manuscript, it was a breeze. So I just had to say a word for useful software!

Today I want to sing the praises of open source shareware! It’s not just make-do, cheapie versions of “real” (read: expensive and branded to the gills) software—on the contrary. A lot of software that is open source and available on pay-what-you-want or free basis is better than just about anything you can get unless you go for expensive professional editions. I want to spread the word about a few of my favourites, particularly since I have recently received a number of questions on how I create some of the resources I’ve shared here.

I just wrote a book; LibreOffice handled a 150-pages, 60k words document without any hassles. LibreOffice is a free and effective alternative to the Microsoft Office Suite, and it although it is originally forked off Open Office, it immediately beat the pants off its predecessor then kept on getting better. As a bonus, it’s also the non-Microsoft suite that has provided me with the best compatibility with MS Office, which is important when you collaborate with others (in particular, better than Open Office and Google Drive.)

Calibre allows me to organize, read, extract, convert, and create e-books so I can read my reference material in the handiest way and share my results. All those free e-books I’ve produced in recent years, like convention programs and role-playing game material were made thanks to Calibre. Even better, creator Kovid Goyal frequently releases updates with new, wonderful features, and the community of fans also provides useful plug-ins. If you use e-books on any device, you should have Calibre to manage your library because there is simply no commercial product that compares.

[Edit: It rocks even harder when you start using it as a server and connect your devices via wireless.]

GIMP, the GNU Image Manipulation Program, is a handy alternative to Adobe PhotoShop or Corel PainShop Pro and has also vastly improved over the years  from its rickety early years. An active community also creates lots of useful plug-ins to extend the core program’s capabilities for image editing, free-form drawing and digital painting, photo-montages, converting between different image formats, map-making, etc.. The only thing I dislike about it is its name, because every time it’s mentioned in conversation in front of a friend of mine who uses a wheelchair, I can see her twitch as if she’d just been slapped. I wish someone had chosen a different name, but it’s been around for 18 years now so it’s difficult to get enough momentum for change.

Scribus is a desktop publishing program that lets you create well laid-out, visually attractive documents. If you can’t afford a professional product like QuarkXPress or Adobe InDesign, Scribus is a much more powerful tool than consumer- or home-level desktop publishers like MS Publisher. It does have a learning curve, precisely because it can do so much more, and the support community is enthusiastic but small. I’ve used it to lay out magazine-style convention programs, character sheets, PDF e-books, and much more. Heck, I even use it to fill forms, now that I’m familiar with it workings.

MyPaint is a wonderfully light art application that works best with a tablet and stylus, and lets you draw or paint “realistically.” I love the way you can make the interface disappear and work as if you screen was a canvas, “dipping” your brushes in the colours to paint; it feels very natural. In addition, you canvas is infinite and you can resize as you go. I’ve described how handy it is for me to be able to do digital art; I’ve used MyPaint for all sorts of art, from ink drawing-style to more painterly.

[Edit: LyX is a document processor based on LaTeX. It comes with a well-designed graphical interface and had a ton of powerful features that allow the user to handle large, complex documents like academic articles, theses, and books. I would not use it to design a game book, but it’s great for a book manuscript, for example. Lots of useful support and documentation available too.]

Finally, these are not creative tools per se but I’m a fan of the Firefox Web browser and the Linux operating system, especially in its Ubuntu build.