I had a chance during the holidays to play with one of my online groups. You know how hard it can be to get a group together, especially when they are spread in different time zones; when the friend who was supposed to run the adventure had to ask for another week to prepare, I offered to run something in our original time slot so we would not lose our precious gaming time.

Since this group has greatly enjoyed Golden Sky Stories, I first thought I would try running Chuubo’s Marvelous Wish-Granting Engine, but I just can’t quite grasp how play proceeds, let alone explain it to others. So I decided to playtest Turn: A Game of Shapeshifters in Small Towns instead. 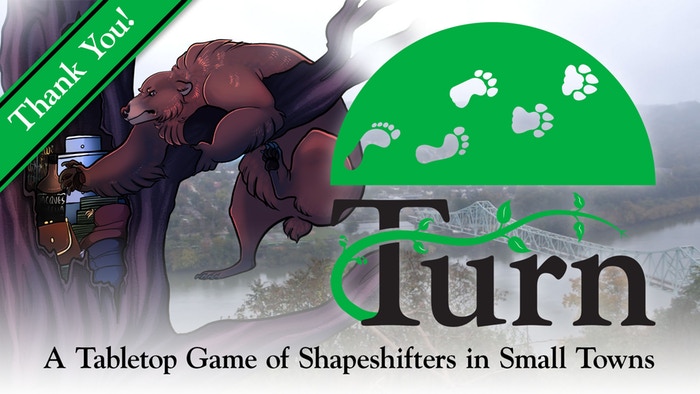 Turn (Daedalum Analog Productions) is “a slice-of-life supernatural roleplaying game set in the modern era”; I think of it as Northern Exposure meets Teen Wolf, or Twin Peaks done by Studio Ghibli.  It’s written by Brie Beau Sheldon and recently had a successful Kickstarter campaign (where you can find the beta playtest version, freely available.) Here is what the author says:

Players in Turn are shapeshifters in small, rural towns who must balance their human lives and habits with their beast needs and instincts in quiet drama. Their baser natures will challenge them as they strive towards goals from everyday tasks to life-changing experiences, and they will need to find comfort in one another to make it through without becoming stressed out.

Turn is part of the family of games Powered by the Apocalypse (PbtA), which means that a lot of the setting and story creation comes from the players, not just the game-master. Starting a game involves group creation of the small town where the stories will unfold, and player characters are designed by picking one human role and one beast archetype and selecting from their menu of options to customize your characters.