7. What was an impactful RPG session? 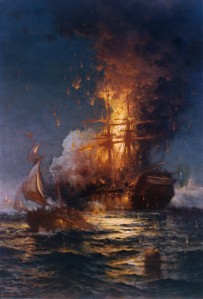 I spoke last year about an emotionally charged, intense session of Night Witches, so I’m not going to repeat it but it certainly is a good answer to today’s question. But again, because I’ve been gaming for a long time I have many possible answers.

Let’s pick a memorable episode of 7th Sea back in 2002, which I chronicled on my now-defunct website (Wayback Machine link). We were six heroes from Castille sent on a secret mission to the port of La Reina del Mar, occupied by Montaigne forces, to assist the still-resisting Castillan underground.

We had a rich tapestry of subplots going on after playing for two and a half years, including many pursued by PCs in secret. For the big climactic episode of the story arc (the portion of the chronicle that is only in bullet points because so much was going on), the GM—my husband Edmund—not only allowed us to split the party, something that still went against most GM advice you could find in those days, but he let us split three-way, then four, then five! Some of us were creating a distraction on the wharves, some were rescuing prisoners, some were blowing up the enemy flagship, etc.  END_OF_DOCUMENT_TOKEN_TO_BE_REPLACED